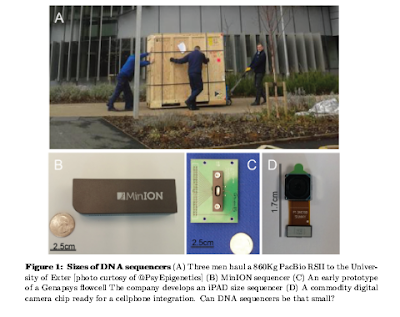 If you recall Friday afternoon Hamming's time takes its roots in one of the comment Dick Hamming made in his famous "You and Your Research". There, he mentioned that while at Bell Labs, he kept some time in the week for thinking of big problems so that he could try to make a go at them. We are also indulging in this similar exercise today, with a few thoughts triggered by the following: A vision for ubiquitous sequencing by Yaniv Erlich here is the abstract:

Genomics has recently celebrated reaching the \$1000 genome milestone, making affordable DNA sequencing a reality. This goal of the sequencing revolution has been successfully completed. Looking forward, the next goal of the revolution can be ushered in by the advent of sequencing sensors - miniaturized sequencing devices that are manufactured for real time applications and deployed in large quantities at low costs. The first part of this manuscript envisions applications that will benefit from moving the sequencers to the samples in a range of domains. In the second part, the manuscript outlines the critical barriers that need to be addressed in order to reach the goal of ubiquitous sequencing sensors.

Also right now in London there is a conference by users of the Oxford nanopore technology, here are a few presentations:
London Calling: A Year of Happy MAPping 14th May 2015 from Nick Loman
and
150514 jts london_calling from jaredsimpson
and Sequencing ultra-long DNA molecules with the Oxford Nanopore MinION by John M Urban, Jacob Bliss, Charles E Lawrence, Susan A Gerbi

Oxford Nanopore Technologies’ nanopore sequencing device, the MinION, holds the promise of sequencing ultra-long DNA fragments superior to 100kb. An obstacle to realizing this promise is delivering ultra-long DNA molecules to the nanopores. We present our progress in developing cost-effective ways to overcome this obstacle and our resulting MinION data, including multiple reads superior to 100kb.

Since sequencing is not NP-hard anymore,  then following Dick's thought process:

Along those lines at some urging from John Tukey and others, I finally adopted what I called ``Great Thoughts Time.'' When I went to lunch Friday noon, I would only discuss great thoughts after that. By great thoughts I mean ones like: ``What will be the role of computers in all of AT&T?'', ``How will computers change science?'' For example, I came up with the observation at that time that nine out of ten experiments were done in the lab and one in ten on the computer. I made a remark to the vice presidents one time, that it would be reversed, i.e. nine out of ten experiments would be done on the computer and one in ten in the lab. They knew I was a crazy mathematician and had no sense of reality. I knew they were wrong and they've been proved wrong while I have been proved right. They built laboratories when they didn't need them. I saw that computers were transforming science because I spent a lot of time asking ``What will be the impact of computers on science and how can I change it?'' I asked myself, ``How is it going to change Bell Labs?'' I remarked one time, in the same address, that more than one-half of the people at Bell Labs will be interacting closely with computing machines before I leave. Well, you all have terminals now. I thought hard about where was my field going, where were the opportunities, and what were the important things to do. Let me go there so there is a chance I can do important things.

and much like Dick and Yaniv, we should ask ourselves:

What will be the impact of commodity sequencing on science and how can we change it? Let us go there so there is a chance we can do important things.