At the last Machine Learning meetup in Paris, someone (I believe it was Vincent Guigue ) made the comment that "not" was a relatively powerful feature for detecting sentiment analysis in a written paragraph. Some of us wondered if the same was really true in French (it does not look like it is). Clearly it opens another line of thought, if you have a model that works well in English, because it has been able to put the right importance on the "not" feature, will that model be as efficient in sentiment analysis in another language (say French) ? [2] . Complexity can sometimes be hidden in the model used on top of the underlying complexity of the problem at hand. Which brings us to a more general comment on complexity, models and all that.

One of the most interesting aspects of games is how addictive they are. There is a generic idea that seems to indicate that a games' addictiveness stems from the fact that these games are NP-Hard/NP-Complete. Here is a fascinating list of NP-complete problems games and puzzles from Wikipedia.

Our brain seems to act as a computing device that can handle small NP complete problems while it to seems to devise greedy strategies for larger ones. Small NP-complete problems probably end up being addictive because we store all the combinations filling up our natural RAM. So much so that we loose our ability to do something else: An eery parallel to the definition of addictiveness. When trying to solve bigger sized problems, we generally go about greedy like techniques and find out that they more or less work... or not.

If you have been reading Nuit Blanche for a little while now, you can see this issue as a sharp phase transition problem similar to the one we see in compressive sensing and advanced matrix factorization: Most of the addictive problems are either solvable greedily or are very small NP complete problems. For small problems, the phase transition is irrelevant but when the problem gets bigger, we end up on one side of the phase diagram.

I was thinking of this this past week which also happened to be the month we learned of Grothendieck's passing.

For instance, this week, we noted that vision and language could be seen as problems that could be formulated as NP-hard advanced matrix factorizations. We also know that within these problems, there are areas of the phase space where any greedy solvers could do well because one can state this problem in some relaxed version. Here is my open question, could we know more about ourselves thanks to our capabilities to do NP-hard problems and devise specific greedy solving ? 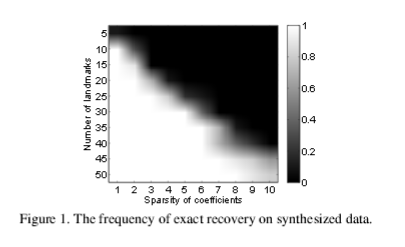 For instance in 3D Shape Reconstruction from 2D Landmarks: A Convex Formulation, we wondered if the phase transition found there could transpose into optical illusions. But it is not just vision, it could be the way we talk (Neural Word Embeddings as Implicit Matrix Factorization ) or the way we learn (Sparse Reinforcement Learning via Convex Optimization). Every time there is convex relaxation, it is a clue that there is a potential sharp phase transition hidden somewhere. And then as we mentioned before (Sunday Morning Insight: Watching P vs NP): "We expect mathematicians to clear the waters" as Olivier Guédon, Roman Vershynin just did in [1] or as Afonso Bandeira explained in this Lecture on Semidefinite Relaxation for Community Detection. Maybe that problem solving is key for our brains to be part of the same hunting tribe and make friends....

We present a simple and flexible method to prove consistency of semidefinite optimization problems on random graphs. The method is based on Grothendieck's inequality. Unlike the previous uses of this inequality that lead to constant relative accuracy, we achieve arbitrary relative accuracy by leveraging randomness. We illustrate the method with the problem of community detection in sparse networks. Despite much progress in the recent years, almost no rigorous results have been known for totally sparse networks -- those with bounded average degrees. We demonstrate that even in this regime, various natural semidefinite programs can be used to recover the community structure up to an arbitrarily small fraction of misclassified vertices. The method is general; it can be applied to a variety of stochastic models of networks and semidefinite programs.

[2] As an observation, at the very least, any country that spends real money in research and for which English is not the national tongue ought to invest in language centric databases freely available to all researchers.
[3] Model Selection with Many More Variables than Observations a presentation by Victoria Stodden
[4] Community Detection via Semidefinite Relaxation, Afonso Bandeira

Liked this entry ? subscribe to Nuit Blanche's feed, there's more where that came from. You can also subscribe to Nuit Blanche by Email, explore the Big Picture in Compressive Sensing or the Matrix Factorization Jungle and join the conversations on compressive sensing, advanced matrix factorization and calibration issues on Linkedin.
By Igor at 11/22/2014 10:41:00 AM