A new sensor, around the blogs in 80 hours and more: Compressive Sensing Edition

The compressive sensing group has more than 1182 members. The sitemeter counter tells us that there has been more than half a million visits in the past four years.
In other news, Tianyi who is now at NIPS mentioned the draft of a new paper Compressed Labeling: An important extension of Hamming Compressed Sensing; at NIPS now. Eric has a post on PCA, Compressive Measurements, and Video. Sergey Ten makes a connection between this paper and this paper. Laurent points to a way to perform some Tomography of the magnetic fields of the Milky Way. Finally, Bob talks about how the whole field on compressive sensing might already patented :-)
Bob  also produced the following: When “exact recovery” is exact recovery in compressive sampling by Bob Sturm. The abstract reads:

Work in compressed sensing employs at least two deﬁnitions of “exact recovery”: 1) all true support elements have been found; or 2) the normalized squared solution error is smaller than ǫ2. The signiﬁcance of this parameter has yet to be analyzed. We show here that it prescribes a maximum allowed missed detection rate, and ﬁnd when these criteria are equivalent. 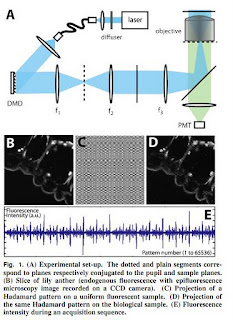 The mathematical theory of compressed sensing (CS) asserts that one can acquire signals from measurements whose rate is much lower than the total bandwidth. Whereas the CS theory is now well developed, challenges concerning hardware implementations of CS-based acquisition devices—especially in optics—have only started being addressed. This paper presents an implementation of compressive sensing in ﬂuorescence microscopy and its applications to biomedical imaging. Our CS microscope combines a dynamic structured wide-ﬁeld illumination and a fast and sensitive single-point ﬂuorescence detection to enable reconstructions of images of ﬂuorescent beads, cells and tissues with undersampling ratios (between the number of pixels and number of measurements) up to 32. We further demonstrate a hyperspectral mode and record images with 128 spectral channels and undersampling ratios up to 64, illustrating the potential beneﬁts of CS acquisition for higher dimensional signals which typically exhibits extreme redundancy. Altogether, our results emphasize the interest of CS schemes for acquisition at a signiﬁcantly reduced rate and point out to some remaining challenges for CS ﬂuorescence microscopy.

Concentration of Measure Inequalities for Toeplitz Matrices with Applications by Borhan M. Sanandaji, Tyrone L. Vincent, and Michael B. Wakin. The abstract reads:

Concentration of Measure (CoM) inequalities are a useful tool for the analysis of randomized linear operators. In this work, we derive such inequalities for randomized compressive Toeplitz matrices, i.e., Toeplitz matrices that have fewer rows than columns and are populated with entries drawn from an independent and identically distributed (i.i.d.) Gaussian random sequence. These inequalities show that the norm of a high-dimensional signal mapped by a compressive Toeplitz matrix to a low-dimensional space concentrates around its mean with a tail probability bound that decays exponentially in the dimension of the range space divided by a quantity which is a function of the signal. This implies that the CoM inequalities for compressive Toeplitz matrices are non-uniform and signal-dependent. To this end, we also study the behavior of the introduced quantity. For example, we show that for the class of sparse signals, the introduced quantity is bounded by the sparsity level of the signal. However, this bound is highly pessimistic for most sparse signals and we show that if a random distribution is imposed on the non-zero entries of the signal, the typical value of the quantity is bounded by a term that scales logarithmically in the ambient dimension. Moreover, we extend our analysis for signals that are sparse in a generic orthobasis. To this end, we introduce the notion of the Fourier coherence of an arbitrary orthobasis and state our generic results based on this measure. Compressive Toeplitz matrices arise in problems involving the analysis of high-dimensional dynamical systems from consecutive convolution-based measurements. As applications of the CoM inequalities, we consider Compressive System Identiﬁcation (CSI) and Compressive Binary Detection (CBD) problems and discuss the CoM inequalities in such applications


In blind deconvolution one aims to estimate from an input blurred image y a sharp image x and an unknown blur kernel k. Recent research shows that a key to success is to consider the overall shape of the posterior distribution p(x, k|y) and not only its mode. This leads to a distinction between MAPx,k strategies which estimate the mode pair x, k and often lead to undesired results, and MAPk strategies which select the best k while marginalizing over all possible x images. The MAPk principle is signiﬁcantly more robust than the MAPx,k one, yet, it involves a challenging marginalization over latent images. As a result, MAPk techniques are considered complicated, and have not been widely exploited. This paper derives a simple approximate MAPk algorithm which involves only a modest modiﬁcation of common MAPx,k algorithms. We show that MAPk can, in fact, be optimized easily, with no additional computational complexity

The attendant code is here.

This paper presents a nonlinear mixing model for hyperspectral image unmixing and nonlinearity detection. The proposed model assumes that the pixel reﬂectances are nonlinear functions of pure spectral components contaminated by an additive white Gaussian noise. These nonlinear functions are approximated using polynomial functions leading to a polynomial post-nonlinear mixing model. The parameters involved in the resulting model are estimated using least squares methods. A generalized likelihood ratio test based on the asymptotic estimator distributions is then proposed to decide if the observed pixel results from the commonly used linear mixing model or from a more general nonlinear mixture. The derivation of a lower bound associated with the unmixing problem subject to the physical constraints of the abundance vectors allows the statistical test to be computed by assuming that the estimators achieve the considered bound. The performance of the detection strategy is evaluated thanks to simulations conducted on synthetic and real data.

Finally, I found this Postdoc position at the University of Oklahoma:


Postdoctoral Research Associate - 2The University of Oklahoma, School of Electrical and Computer Engineering is hiring for two positions in the area of radar engineering. These positions will provide advanced technical expertise on radar-related topics in signal processing and in RF compressive receiver analysis and design. They will assist with technical supervision of graduate students and other technical staff, if appropriate and will require periodic reporting and documentation as required by program timelines. Occasional travel may be required.
Required Skills: Demonstrated experience in information theory and/or statistical signal processing; ability for independent research with associated publication record; ability to work in a team environment; ability to communicate effectively verbally and in writing.
Desired Skills: Experience in compressive sensing; radar algorithm development for imaging, target detection and tracking; RF or spread-spectrum receiver design and implementation; radar target recognition; numerical optimization techniques; and experience with one or more high-level programming languages (C, C++, etc.).
The DARPA Knowledge Enhanced Compressive Measurement (KECoM) project has the primary goals of 1) developing a mathematical framework for incorporating prior knowledge of tasks and observed signals into the design of compressive sensors, and 2) applying this framework to relevant sensing modalities.
The University of Oklahoma School of ECE expects a new award under the KECoM program. Under this award, OU will investigate and demonstrate the optimization of compressive sensing measurement kernels for radar and communications. Measurements will be optimized using information-theoretic techniques and available prior knowledge while enforcing hardware-specific physical constraints. A postdoctoral researcher will assist with developing optimization methods, perform performance analyses, and assist with hardware demonstrations of a compressive spread-spectrum receiver and compressive radar transmitter/receiver.
Original postdoctoral appointment is for one year with possible renewal.

Liked this entry ? subscribe to Nuit Blanche's feed, there's more where that came from. You can also subscribe to Nuit Blanche by Email, explore the Big Picture in Compressive Sensing or the Matrix Factorization Jungle and join the conversations on compressive sensing, advanced matrix factorization and calibration issues on Linkedin.
By Igor at 12/12/2011 04:29:00 AM