Can I tell you my secret now ?....I see dead reconstructions

In Optimization with multiple non-standard regularizers and Multiple Regularizers For the Reconstruction of Natural Objects ?, the question is how do we get regularizers to provide a certain instance as this is generally connected to a blind deconvolution problem: i.e. we try to get the cleanest image from a blurry one. We also need to eventually have the guts to connect these regularizers to the physics of either the transfer function of the sensor that took that image or the object being imaged itself.
Here is an example that I feel is not used enough. It was mentioned by Tony Chan in his presentation TVL1 models for imaging: global optimization and geometric properties: Part I  at Texas A&M back in 2008. In there he presented how using only one regularizer (TV), the changing of the Lagrange Mutliplier meant a drastic change in the perception of an image. 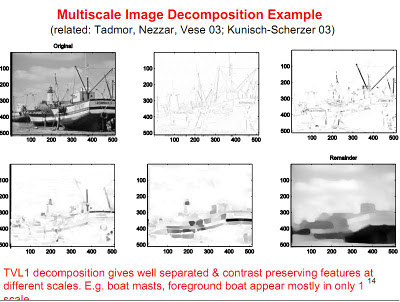 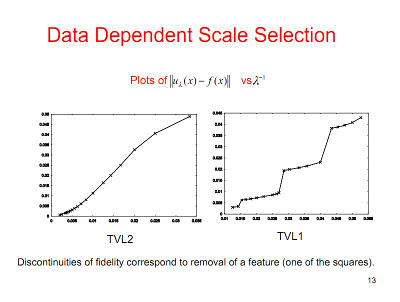 Quite clearly, as Tony mentioned in the presentation, some of these images looked like impressionists paintings. It so happens that a year earlier,  Michael Marmor made something of a connection and went about in trying provide some perspective on what some of these painters were seeing. Monet, for instance, is known to have had eye problem. From the press release here are some of the photos with attendant captions.

One could argue that Michael Marmor's reconstructions look eerily similar to the ones Tony showed when the  Lagrange multiplier is increased (leading to a loss of certain scales). In short, by varying the multiplier, one can find different solutions. Some are clearer than others, but some of the less clear ones are also worthy...about $80 million worth. More seriously, how do we connect the lagrange mutlipliers to the physical defect of the eye's point spread function ? Since the lagrange multiplier is somehow the ratio of two multipliers, aren't we facing a typical Bejan constructal theory thingy where the ratio expresses the balance between two difference phenomena in the eye itself.?

Liked this entry ? subscribe to Nuit Blanche's feed, there's more where that came from. You can also subscribe to Nuit Blanche by Email, explore the Big Picture in Compressive Sensing or the Matrix Factorization Jungle and join the conversations on compressive sensing, advanced matrix factorization and calibration issues on Linkedin.
By Igor at 12/09/2011 03:48:00 AM