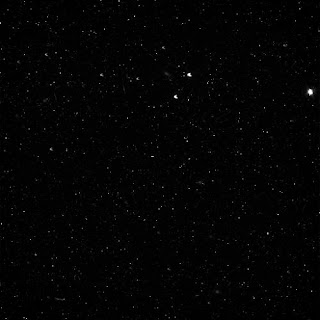 Prasad Sudhakar just sent me the following (Thanks to Laurent Duval for a similar e-mail ) about the videos made at the LVA 2010 meeting:

Thanks Prasad and Laurent

Tensor decompositions have been increasingly used in Signal Processing during the last decade. In particular, Tucker and HOSVD decompositions are attractive for compression purposes, and the Canonical Polyadic decomposition (CP), sometimes referred to as Parafac, allows to restore identifiability in some Blind Identification problems, as pointed out already twenty years ago with the birth of Independent Component Analysis. There exist sufficient conditions under which the CP is essentially unique. These conditions have been first stated by Kruskal in the seventies, and impose a bound between tensor rank and the so-called k-rank of matrix factors, itself closely related to the notion of matrix spark used in Sparse Component Analysis. It is possible to relate this uniqueness condition to the so-called coherence condition obtained in the framework of compressed sensing. A computationally feasible variant of Kruskal’s uniqueness condition is obtained, where the coherence appears as a proxy for k-rank. Problems of sparsest recovery with infinite continuous dictionaries, lowest-rank tensor representation, and Blind Source Separation are addressed in a uniform fashion.
These statements are illustrated by an application in antenna array processing, namely blind localization and extraction of radiating sources from structured multiple antennas. With appropriate bounds on a certain distance between radiating sources, one can always guarantee the existence and uniqueness of a best rank-r approximation of a tensor, and hence of source estimates.
Pierre Comon graduated in 1982, and received the Doctorate degree in 1985, both from the University of Grenoble, France. He later received the Habilitation to Lead Researches in 1995, from the University of Nice, France. He has been for nearly 13 years in industry, first with Crouzet-Sextant, Valence, France, between 1982 and 1985, and then with Thomson Marconi, Sophia-Antipolis, France, between 1988 and 1997. He spent 1987 with the ISL laboratory, Stanford University, CA. He joined in 1997 the Eurecom Institute, Sophia-Antipolis, France, and left during the fall of 1998. He is now research director with CNRS since 1998 at laboratory I3S, University of Nice Sophia-Antipolis, France, where he heads the Stic Doctoral School. His research interests include High-Order Statistics (HOS), Blind Deconvolution and Equalization, tensor-based Factor Analysis and Statistical Signal and Array Processing.
He was Associate Editor of the IEEE Transactions on Signal Processing from 1995 to 1998, and a member of the French National Committee of Scientific Research from 1995 to 2000. He was the coordinator of the European Basic Research Working Group on HOS "ATHOS", from 1992 to 1995. Between 1992 and 1998, he was a member of the Technical and Scientific Council of the Thomson Group. Between 2001 and 2004 he acted as launching Associate Editor with the IEEE Transactions on Circuits and Systems I, in the area of Blind Techniques. He is Fellow of the IEEE. He is now Associate Editor of the Elsevier journal Signal Processing.

Signals are often transformed by non-linear deformation operators, including non rigid translations, scalings and rotations for images. These operators belong to complex Lie groups and play the role of "unknown latent variables". Identifying deformations provides important information such as depth or velocity for images.
To classify signals despite unknown deformations, invariant representations have been studied in image and audio processing. We shall first review state of the art learning and computer vision approaches. They include wavelet transforms, deep learning neural network architectures, and histogram-based representations such as "bags of words" and SIFT.
The efficiency and limitations of these algorithms raise important representation issues. To answer these problems,we introduce a recursive interferometric transformation which builds nearly invariants descriptors of groups of deformations, while preserving necessary information to discriminate signals. Recursive interferometry linearizes non-linear deformations which are then calculated through solutions of multiple linear systems. Applications will be shown to discriminate and estimate the deformations of structured image patterns and random textures.
Stéphane Mallat was born in Paris, France. He received the Ph.D. degree in electrical engineering from the University of Pennsylvania, Philadelphia, in 1988. In 1988, he joined the Computer Science Department of the Courant Institue of Mathematical Sciences where he was Assoiate Professor in 1994 and Professsor in 1996. Since 1995, he has been a full Professor in the Applied Mathematics Department at Ecole Polytechnique, Paris. From 2001 to 2008 he was a co-founder and CEO of a start-up company.
Dr. Mallat is an IEEE fellow. He received the 1990 IEEE Signal Processing Society's paper award, the 1993 Alfred Sloan fellowship in Mathematics, the 1997 Outstanding Achievement Award from the SPIE Optical Engineering Society, the 1997 Blaise Pascal Prize in applied mathematics from the French Academy of Sciences, the 2004 European IST Grand Prize, the 2004 INIST-CNRS prize for most cited French researcher in engineering and computer science, and the 2007 IST Grand Pize of the French Academy of Sciences. His research interests include computer vision, signal processing and applied harmonic analysis.

Recent advances in the development of technology based on Raman scattering as a chemical analytical technique have made it possible to quantitatively detect spectral mixtures of multiple DNA sequences. However, to fully exploit these techniques inferential methodologies are required which can deconvolute the observed mixture and infer the composition of distinct DNA sequences present in the overall composite. Inferring the spectral decomposition is posed as a model selection problem for a non-negative bilinear statistical model, and the required Markov chain Monte Carlo inferential methodology is developed. In particular a Gibbs sampler and Reversible Jump Markov chain Monte Carlo methods are presented along with techniques based on estimation of the marginal likelihood. The results reported in this paper are particularly encouraging highlighting that for multiplexed Raman spectra, inference of the composition of original sequences present in the mixture is possible to acceptable levels of accuracy. This statistical methodology makes the exploitation of multiplexed surface enhanced resonance Raman scattering spectra in disease identification a reality.
Mark Girolami has been Professor of Computing & Inferential Science since 2006 at the University of Glasgow, where he holds a joint appointment in the Department of Computing Science and the Department of Statistics. He was awarded an EPSRC Advanced Research Fellowship in 2007. He obtained his PhD in 1998 with a thesis on Independent Component Analysis (ICA), and in 2009 he was awarded the SPIE Pioneer Award  for the impact his contributions to ICA have had on advancing neuro-imaging analysis technology. At Glasgow he leads the cross-disciplinary Inference Research Group (www.dcs.gla.ac.uk/inference) currently consisting of 17 researchers (8 Post Doctoral RAs and 9 PhD students) where the main focus of research is methodological development in statistical inference and machine learning with major applications in computational and systems biology. Other recent successful applications include statistical modeling of telecom fraud and counterfeit currency detection.
His research is funded by current grants from EPSRC, BBSRC, the British Heart Foundation, Microsoft Research Europe and various industrial collaborators. He is also co-investigator on a recently announced Cancer Research UK five year Programme Grant worth £1.5M. Along with UK based industrial collaborators he is an author of three international patents that have emerged from his research work. Girolami is a member of the EPSRC Peer Review College (2005–2010), he serves on the Medical Research Council (MRC) Bioinformatics Training Panel (2005–2010) and is an associate-editor for IEEE Trans Neural Networks and Pattern Recognition Letters.

Chair: Fabian Theis
Although insufficient for separation in "classical" (temporally iid) ICA, second order statistics (SOS) can become a viable, and even optimal ICA tool when the sources exhibit temporal diversity. Asymptotic optimality can then be attained (for Gaussian sources) by full, proper exploitation of SOS. In a sense, early work on SOS-based separation (e.g., AMUSE, SOBI, TDSEP) exploited SOS only "half-way through", in forming the equations - but not in their ``weighting". Moreover, these methods only considered the particular case of stationary sources. Nonstationary sources were considered later on, but still only through particular cases, like block-stationarity or cyclostationarity.
In many cases of interest the sources are not stationary, nor do they take any particular form of non-stationarity. However, repeated experiments (different realizations sharing the same temporal covariance patterns) may be available, e.g., when synchronized to some external stimulus, such as in fMRI. The resulting data is three-dimensional (with an experiment-index dimension), allowing convenient estimation of the covariance patterns.
We shall show how to exploit the estimated SOS for asymptotic optimality (assuming Gaussian sources) in such cases. Maximum Likelihood (ML) separation will first be considered for the semi-blind case, with known covariance patterns. Then we shall show that asymptotically, there is no performance degradation in the ``fully-blind" case, when these covariance patterns are estimated from the data. Significant performance improvement over competing methods will be demonstrated, showing how the ML estimate can be interpreted as an optimally weighted set of least-squares equations.

Arie Yeredor received the B.Sc. (summa cum laude) and Ph.D. degrees in electrical engineering from Tel-Aviv University (TAU) in  1984 and 1997, respectively. Currently, he is with the Department of Electrical Engineering—Systems, School of Electrical Engineering, TAU, where he has been awarded the yearly Best Lecturer of the Faculty of Engineering Award five times. He also holds a consulting position with NICE Systems Inc., Ra’anana, Israel, in the fields of speech and audio processing, video processing, and emitter location algorithms.
Dr. Yeredor served as Associate Editor for the IEEE Signal Processing Letters and for the IEEE Transactions on Circuits and Systems—Part II: Express briefs, and he now serves as Associate Editor for the IEEE Transactions on Signal Processing and also as Technical Co-Chair of the 3rd International Workshop on Computational Advances in Multi-Sensor Adaptive Processing (CAMSAP'09 in Aruba). He is a member of the IEEE Signal Processing Society’s Signal Processing Theory and Methods (SPTM) Technical Committee. His research interests are in statistical signal processing (mainly BSS/ICA), sensor-array and multi-channel signal processing, estimation theory and linear-algebraic tools in signal processing.

Email ThisBlogThis!Share to TwitterShare to FacebookShare to Pinterest
labels: BlindDeconvolution