These Technologies Do Not Exist: Planet Sized Sensors

About a year ago, I mentioned the possible utilization of the Moon as a way of imaging the Earth. Let me be more precise: Five hundred years ago, Leonardo explained what the Earthshine was in the Codex Leicester (Sheet 2A, folio 2r), i.e. it is a reflection of the Earth on the Moon. While this is great news for astrophysicist that are testing their theories on how they can detect exo-planets [2], this Earth reflection should also be seen as a great opportunity for imaging Earth. The test done in [1] showed that you could indeed detect several chemical elements of the earth surface but that these contributions come in a very multiplexed manner because the Moon has a lot of mountains/craters.From [1]:

The point I am making is that the need to quantify this "washing out of spatial information" comes primarily from people whose  goal is to detect chemical elements on exo-planets first. To them, spatial information , while interesting, is not likely to be of concern for a little while (detection limit of sensors) since in Exo-planet detection, the topography of the planet is unknown. 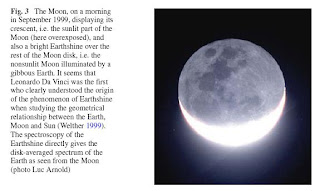 In our case, however, because of satellites orbiting that Moon for the past 40 years, we have a pretty good idea of the topography of that celestial body (1 meter resolution) and have a reasonable understanding of the reflectance properties of the soil. Because the mixing of the rays of light is randomized by the Moon terrain, we know from compressive sensing that if we know the mixing matrix, we could in effect deconvolute the light signal in order to produce spatial information not unlike in the case of the Random Lens Imager.In other words, the Moon terrain acts as a random mirror of sorts.. Now the big question is: what type of image resolution of Earth could we get out of our current knowledge of the Moon terrain ? While some folks are not interested in miles (km) size resolution, other folks are. The possibility of doing such an experiment would require specialists of the Moon optical and compressed sensing to be together in the same room (funded). Since it is difficult to estimate the resolution that could be obtain from such a scheme I doubt  that any research of this kind is going to be funded and or even exist in the near future.
[Update: Yesterday, Researchers in Paris published on observing the Earth atmosphere bouncing off the Moon in a Moon eclipse, in the press release one can read:


....Using SOPHIE, a high-resolution spectrograph attached to the Observatoire de Haute Provence's 1.93-meter telescope in southern France, the researchers successfully detected ozone, oxygen, nitrogen, and sodium in the reflected light from Earth's atmosphere. "The surprise was that we succeeded with extremely sparse observations under relatively bad weather conditions," Vidal-Madjar says. "But seeing how easily oxygen was seen strongly argues in favor of high-spectral-resolution searches [of Earthlike extrasolar planets]." The team reports its findings in a paper accepted for publication in Astronomy & Astrophysics...

The paper is The Earth as an extrasolar transiting planet: Earth's atmospheric composition and thickness revealed by Lunar eclipse observations on arxiv.and one can see the poor spatial resolution (two points) used in the paper in the following figure 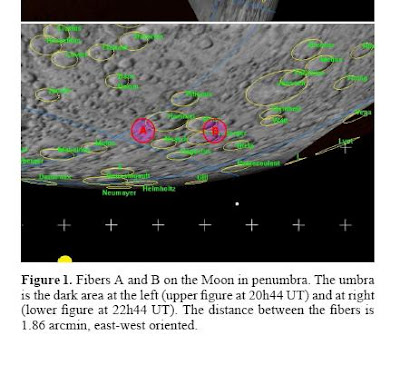