As I am away, the latest news on Compressive and Compressed Sensing can be found in the links found at the end of this entry. In the meantime, two news:

We've released the FCam API for the Nokia N900 smartphone, along with some example applications. This is the same API we use to control the Frankencamera F2 (shown above). Now you can make your N900's camera programmable (without bricking the phone)! Go here to get started....On July 21, 2010 we released the source code for our N900 implementation. A binary executable was also released, which can be downloaded to any retail N900 (without bricking the phone), thereby making its camera programmable. We also plan to make the more powerful Frankencamera available to the international research and teaching community at minimal cost, but we don't yet have timetable for this release. When we release it, distribution to universities in the U.S. will be free, financed by a grant from the National Science Foundation. The Camera 2.0 project, which began as a collaboration between the Stanford Computer Graphics Laboratory and the Nokia Research Center Palo Alto Laboratory, also receives funding from Adobe Systems, Kodak, Hewlett-Packard, and the Walt Disney Company. The NSF portion of the project is in collaboration with Fredo Durand and William Freeman of MIT.

l1-minimization refers to finding the minimum l1-norm solution to an underdetermined linear system b=Ax. It has recently received much attention, mainly motivated by the new compressive sensing theory that shows that under quite general conditions the minimum l1-norm solution is also the sparsest solution to the system of linear equations. Although the underlying problem is a linear program, conventional algorithms such as interior-point methods suffer from poor scalability for large-scale real world problems. A number of accelerated algorithms have been recently proposed that take advantage of the special structure of the l1-minimization problem. In this paper, we provide a comprehensive review of five representative approaches, namely, Gradient Projection, Homotopy, Iterative Shrinkage-Thresholding, Proximal Gradient, and Augmented Lagrange Multiplier. The work is intended to fill in a gap in the existing literature to systematically benchmark the performance of these algorithms using a consistent experimental setting. In particular, the paper will focus on a recently proposed face recognition algorithm, where a sparse representation framework has been used to recover human identities from facial images that may be affected by illumination, occlusion, and facial disguise. MATLAB implementations of the algorithms described in this paper have been made publicly available. 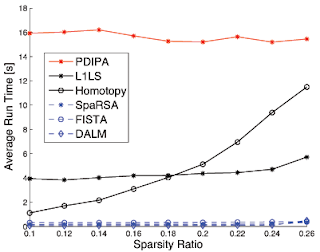 The sites where the benchmarks are located is here. From the page:


The package contains a consolidated implementation of seven l-1 minimization algorithms in MATLAB. Each function uses a consistent set of parameters (e.g., stopping criterion and tolerance) to interface with our benchmark scripts.

Now on to the sites to check for any news on compressive sensing, here is the (incomplete list).