CS: The U of Arizona Random FSS Imager.

If you recall, the date at which the initial papers on the Compressive Sensing Georgia Tech Transform Imager were published (2001 see the end of this entry), most papers on Compressive Sensing were not out yet. While the hardware was built with another purpose in mind, it ended up fitting nicely with the arrival of Justin Romberg at Georgia Tech. I think today's technology is following a similar path.

Pawan K. Baheti and Mark A. Neifeld devised a Feature-specific structured imaging device where a projector would illuminate a target with a known dictionary of functions. 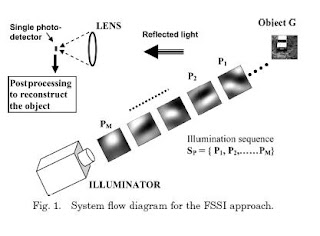 The abstract of their paper reads:

We present a feature-specific imaging system based on the use of structured light. Feature measurements are obtained by projecting spatially structured illumination onto an object and collecting all the reflected light onto a single photodetector. Principal component features are used to define the illumination patterns. The optimal linear minimum mean-square error (LMMSE) operator is used to generate object estimates from the measured features. We study the optimal allocation of illumination energy into each feature measurement in the presence of additive white Gaussian detector noise and optical blur. We demonstrate that this new imaging approach reduces imager complexity and provides improved image quality in high noise environments. Compared to the optimal LMMSE postprocessing of a conventional image, feature-specific structured imaging provides a 38% rms error reduction and requires 400 times fewer measurements for a noise standard deviation of \sigma = 10^{-3} . Experimental results validate these theoretical predictions.

But as in the case of the Compressive Sensing Georgia Tech Transform Imager, Pawan Baheti and Mark Neifeld figured out that by changing the projections using incoherent ones, one could get a Compressed Sensing Hardware. In this case, the Random Feature-Specific Structure Imager (or RFSSI). 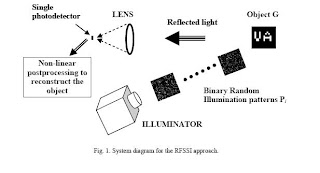 In Random projections based feature-specific structured imaging, Pawan Baheti and Mark Neifeld propose the use of projectors to devise interesting elements of a scene using random patterns. The abstract reads:

We present a feature-specific imaging system based on the use of structured illumination. The measurements are defined as inner products between the illumination patterns and the object reflectance function, measured on a single photodetector. The illumination patterns are defined using random binary patterns and thus do not employ prior knowledge about the object. Object estimates are generated using L1-norm minimization and gradient-projection sparse reconstruction algorithms. The experimental reconstructions show the feasibility of the proposed approach by using 42% fewer measurements than the object dimensionality. 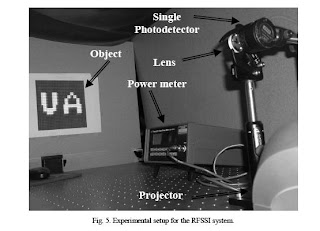 GPSR is used for the reconstruction. This projector idea reminded me of the shape from shading /"3D photography on your desk" method devised by Jean-Yves Bouguet. We now have its Compressed Sensing equivalent.

Since the set-up was produced with the regular dictionaries in mind, other papers have gone further and it is a question of time before they are adapted to the CS FSSI. These papers are:

We present an adaptive feature-specific imaging (AFSI) system and consider its application to a face recognition task. The proposed system makes use of previous measurements to adapt the projection basis at each step. Using sequential hypothesis testing, we compare AFSI with static-FSI (SFSI) and static or adaptive conventional imaging in terms of the number of measurements required to achieve a specified probability of misclassification (P(e)). The AFSI system exhibits significant improvement compared to SFSI and conventional imaging at low signal-to-noise ratio (SNR). It is shown that for M=4 hypotheses and desired P(e)=10(-2), AFSI requires 100 times fewer measurements than the adaptive conventional imager at SNR=-20 dB. We also show a trade-off, in terms of average detection time, between measurement SNR and adaptation advantage, resulting in an optimal value of integration time (equivalent to SNR) per measurement.

Imagery is often used to accomplish some computational task. In such cases there are some aspects of the imagery that are relevant to the task and other aspects that are not. In order to quantify the task-specific quality of such imagery, we introduce the concept of task-specific information (TSI). A formal framework for the computation of TSI is described and is applied to three common tasks: target detection, classification, and localization. We demonstrate the utility of TSI as a metric for evaluating the performance of three imaging systems: ideal geometric, diffraction-limited, and projective. The TSI results obtained from the simulation study quantify the degradation in the task-specific performance with optical blur. We also demonstrate that projective imagers can provide higher TSI than conventional imagers at small signal-to-noise ratios.

From afar, there seems to be a definite resemblance between this work and that of the Rice Group when performing Compressive sensing classification ( Multiscale random projections for compressive classification) using the Single pixel camera. Physically, the two set-ups are not that different, the Rice Camera uses passive lighting whereas this RFSSI Camera is uses active lighting.

In a different direction we have: Sparsity constrained regularization for multiframe image restoration by Shankar PM and Mark Neifeld. The abstract reads:

In this paper we present a new algorithm for restoring an object from multiple undersampled low-resolution (LR) images that are degraded by optical blur and additive white Gaussian noise. We formulate the multiframe superresolution problem as maximum a posteriori estimation. The prior knowledge that the object is sparse in some domain is incorporated in two ways: first we use the popular l(1) norm as the regularization operator. Second, we model wavelet coefficients of natural objects using generalized Gaussian densities. The model parameters are learned from a set of training objects, and the regularization operator is derived from these parameters. We compare the results from our algorithms with an expectation-maximization (EM) algorithm for l(1) norm minimization and also with the linear minimum-mean-squared error (LMMSE) estimator. Using only eight 4x4 pixel downsampled LR images the reconstruction errors of object estimates obtained from our algorithm are 5.5% smaller than by the EM method and 14.3% smaller than by the LMMSE method

We have also developed an active illumination-based single pixel camera using an off-the-shelf overhead projector and a laptop with a USB-based A/D device connected to a sensor. Our goal to developing this camera was portability of the system. In fact, we have presented demonstrations using this portable camera at the TI Developer's Conference 08 (Dallas, TX) and at ICASSP 08 (Las Vegas, NV).

Great to know. Do you guys have a paper/ video / website / photos of this portable camera ? Have you called it a special name ?