CS: Advances in Numerical Harmonic Analysis, MDL and CS, Surveillance camera, Sound Classification, CVX and a workshop and a seminar. Massimo Fornasier has a presentation on Advances in Numerical Harmonic Analysis. The outline of the talk is:

1 Frames in Hilbert spaces: towards the sparsity concept
2 Finite frames and random ensembles

His main area of research is what is called Compressive Algorithms. A presentation can be found is this poster and in his habilitation. 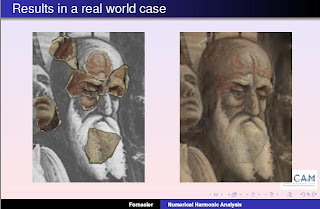 The second presentation with the same title has the following outline:

1 Sparse recovery
2 Accelerations
3 Joint sparsity
Also found on the internets these two papers, only the first one is available:

In this paper, we propose using two methods to determine the canonical views of 3D objects: minimum description length (MDL) criterion and compressive sensing method. MDL criterion searches for the description length that achieves the balance between model accuracy and parsimony. It takes the form of the sum of a likelihood and a penalizing term, where the likelihood is in favor of model accuracy such that more views assists the description of an object, while the second term penalizes lengthy description to prevent overfitting of the model. In order to devise the likelihood term, we propose a model to represent a 3D object as the weighted sum of multiple range images, which is used in the second method to determine the canonical views as well. In compressive sensing method, an intelligent way of parsimoniously sampling an object is presented. We make direct inference from Donoho1 and Candes'2 work, and adapt it to our model. Each range image is viewed as a projection, or a sample, of a 3D model, and by using compressive sensing theory, we are able to reconstruct the object with an overwhelming probability by scarcely sensing the object in a random manner. Compressive sensing is different from traditional compressing method in the sense that the former compress things in the sampling stage while the later collects a large number of samples and then compressing mechanism is carried out thereafter. Compressive sensing scheme is particularly useful when the number of sensors are limited or the sampling machinery cost much resource or time.

The application of Compressive Sensing technique on a stationary surveillance camera system by Jing Zheng and Eddie Jacobs. The abstract reads:

Compressive Sensing (CS) is a recently emerged signal processing method. It shows that when a signal is sparse in a certain basis, it can be recovered from a small number of random measurements made on it. In this work, we investigate the possibility of utilizing CS to sample the video stream acquired by a fixed surveillance camera in order to reduce the amount of data transmitted. For every 15 continuous video frames, we select the first frame in the video stream as the reference frame. Then for each following frame, we compute the difference between this frame and its preceding frame, resulting in a difference frame, which can be represented by a small number of measurement samples. By only transmitting these samples, we greatly reduce the amount of transmitted data. The original video stream can still be effectively recovered. In our simulations, SPGL1 method is used to recover the original frame. Two different methods, random measurement and 2D Fourier transform, are used to make the measurements. In our simulations, the Peak Signal-to-Noise Ratio (PSNR) ranges from 28.0dB to 50.9dB, depending on the measurement method and number of measurement used, indicating good recovery quality. Besides a good compression rate, the CS technique has the properties of being robust to noise and easily encrypted which all make CS technique a good candidate for signal processing in communication.

The dimensionality reduction aspect of compressed sensing that yields studies on simpler manifolds (coordinates size of the new features are smaller) have been looked at by Jort Gemmeke in the voice case. The issue is that when one wants to classify or imput voice/sounds tracks, one deals with very large training datasets. It looks like voice is not the only field where random projection can be used as a dimensionality reduction technique as shown in the next two articles by Neta Rabin, Alon Schclar, Valery Zheludev and Amir Averbuch.

Detection of moving vehicles via dimensionality reduction . The abstract reads:

Automatic vehicle detection is a common task in security and surveillance systems. A microphone is placed in a designated area and a hardware/software system processes the sounds that are intercepted by the microphone to detect vehicles as they pass by in the designated area. We propose a novel algorithm for real-time automatic detection of vehicles. The proposed scheme uses dimensionality reduction and utilizes ideas from compressed sensing.

Wavelet based acoustic detection of moving vehicles. The abstract reads:

When are we going to see Compressive Microphones is my question ?

We now have version 1.2 of the CVX package by Michael Grant, Stephen Boyd and Yinyu Ye
and some news:

Support for the exponential family of functions

In order to facilitate some upcoming developments for CVX, we have decided that it will be necessary to discontinue support for Matlab 6.1. This change will occur at some point this summer, at which point CVX will require the use of Matlab version 6.5 or newer. If you currently use Matlab 6.1, please contact us to discuss alternatives.

A Call for Papers for the ICA Research Network International Workshop to be held on 25-26 September, 2008 in Liverpool, U.K.

The ICA Research Network is sponsored by the Engineering and Physical Sciences Research Council (EPSRC) in the U.K., and is aimed at improving communications in the area of Blind Source Separation (BSS) and Independent Component Analysis (ICA). The 2008 ICA Research Network Workshop will be held at the University of Liverpool covering the latest developments and techniques in the area of source separation and ICA. Submissions from international participants are most welcome.

A special feature of this workshop will be a special poster session where authors will have the opportunity to present their current work in progress. Authors should indicate their preference at the submission stage and submit short papers.

and a Theory seminar at the Technion on Expander codes, Euclidean Sections, and Compressed Sensing Venkatesan Guruswami, (Washington University)

Classical results in high-dimensional geometry from the 1970's state that a random subspace of R^N of dimension N/2 has "distortion" O(1) w.h.p where the distortion is measured by sqrt{N} times the largest ratio of the L_2 to L_1 norms of a vector in the subspace. (So each vector in the subspace has its mass spread nearly evenly over a constant fraction of the coordinates.) This result is a particular example of the use of the probabilistic method, a technique which is ubiquitous in asymptotic convex geometry. Similar randomized geometric constructions arise in areas like dimensionality reduction and compressed sensing, but it seems that such objects are very hard to come by explicitly.

We will describe constructions inspired by expander codes that can be used to produce subspaces with distortion nearly as good as a random subspace either explicitly or with sublinear randomness. Specifically, we construct an explicit subspace of R^N with dimension N(1-o(1)) and distortion (slightly worse than) poly(log N). The construction combines various ingredients such as Ramanujan graphs, sum-product theorems in finite fields, and Kerdock codes/mutually unbiased bases. We are also able to construct subspaces of R^N of proportional dimension with O(1) distortion using N^delta random bits for any constant delta > 0 (and hence deterministically in sub-exponential time). The talk will also briefly discuss connections to sparse signal recovery (i.e., compressed sensing).