Progress usually comes from a steady technology bootstrap…until it doesn’t.

Take for instance the race for the $1,000 genome that started in the early 2000s. Initially, sequencing the human genome meant a race between the well-funded public and private sectors but more importantly, the resources for the first breakthrough ended up costing upwards of $450M. Yet despite all the economic promise of genome sequencing, had Moore’s law been applied, sequencing one full genome would still cost $100,000 today. However, once the goal became clearer to everyone, a diversity of technologies and challengers emerged. This intense competition eventually yielded a growth faster than Moore’s Law. The main takeaway is that one cannot rely on the steady progress of one specific technology alone to commoditize tools. 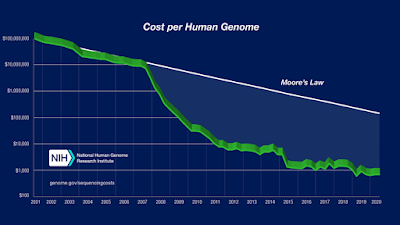 What does this have to do with the current state of silicon computing and the new demand for Large Language Models (LLMs)? Everything if you ask us and here is how.

Less than a year into existence, Large Language Models like GPT-3 have already spawned a new generation of startups built on the ability of the model to respond to requests for which it was not trained. More importantly for us, hardware manufacturers are positing that one or several customers will be willing to put a billion dollars on the table to train an even larger model in the coming years.

The sad truth is that extrapolating their findings to the training of a 10 Trillion parameters model involves a supercomputer running continuously for two decades. The minimum capital expenditure of this adventure is estimated in the realm of several hundreds of million dollars.

Much like what happened in sequencing, while silicon improvement and architecture may achieve speedups in the following years, it is fair to say that, even with Moore’s law, no foreseeable technology can reasonably train a fully scaled-up GPT-4 and grab the economic value associated with it. 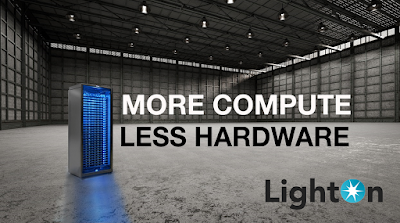 Rebooting silicon with a different physics, light, and NvNs

For a real breakthrough to occur, much like what happened in the sequencing story, different technologies need to be jointly optimized. In our case, this means performing co-design with new hardware and physics but also going rogue on full programmability.

LightOn’s photonic hardware can produce massively parallel matrix-vector multiplications with an equivalent of 2 trillion parameters “for free”: this is about one-fifth of the number of parameters needed for GPT-4. Next comes revisiting the programmability. Current LightOn’s technology keeps these weights fixed by design. Co-design means finding the algorithms for which CPUs and GPUs can perform some of the most intelligent computations and how LightOn’s massive Non-von Neumann (NvN) hardware can do the heavy lifting. We already published how we are replacing backpropagation, the workhorse of Deep Learning, with an algorithm that unleashes the full potential of our hardware in distributed training. We are also working similarly on an inference step that will take full advantage of the massive number of parameters at our disposal. This involved effort relies in a heavy part thanks to our access to ½ million GPU hours on some of France’s and Europe’s largest supercomputers.

And this is just the beginning. There is a vast untapped potential for repurposing large swaths of optical technologies directed primarily for entertainment and telecommunication into computing.

Based on the GPT-3 training cost estimates, achieving a $1,000 GPT-3 requires four orders of magnitude improvements. Much like what occurred in 2007 with the genome sequencing revolution, Moore’s law may take care of the first two orders of magnitude in the coming decade but the next two rely on an outburst of new efficient technologies — hardware and algorithms. It just so happens that GPT-3 has close to 100 layers, so achieving two orders of magnitude savings may arise faster than you can imagine. Stay tuned!

Igor Carron is the CEO and co-founder at LightOn

Other links:
Paris Machine Learning: Meetup.com||@Archives||LinkedIn||Facebook|| @ParisMLGroup About LightOn: Newsletter ||@LightOnIO|| on LinkedIn || on CrunchBase || our Blog
About myself: LightOn || Google Scholar || LinkedIn ||@IgorCarron ||Homepage||ArXiv
By Igor at 4/06/2021 10:23:00 AM