So the great convergence between sensing and deep learning continues. The first paper is a potential improvement to our approach, the second mixes compressive sensing and Deep Learning while the last paper uses our approach and builds a deep learning solver (several other groups have done similar things in the past see some of the blog entries under the MLHardware hashtag). Enjoy !

Recent studies show that compressed sensing (CS) can recover sparse signal with much fewer measurements than traditional Nyquist theorem. From another point of view, it provides a new idea for super-resolution imaging, like the emergence of single pixel camera. However, traditional methods implemented measurement matrix by digital mirror device (DMD) or spatial light modulator, which is a serial imaging process and makes the method inefficient. In this paper, we propose a super resolution imaging system based on parallel compressed sensing. The proposed method first measures the transmission matrix of the scattering sheet and then recover high resolution objects by “two-step phase shift” technology and CS reconstruction algorithm. Unlike traditional methods, the proposed method realizes parallel measurement matrix by a simple scattering sheet. Parallel means that charge-coupled device camera can obtain enough measurements at once instead of changing the patterns on the DMD repeatedly. Simulations and experimental results show the effectiveness of the proposed method. 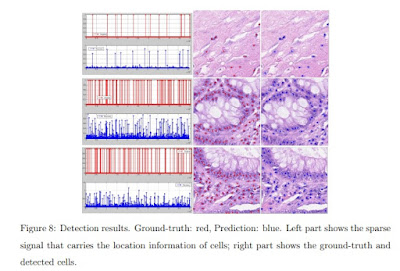 The ability to automatically detect certain types of cells in microscopy images is of significant interest to a wide range of biomedical research and clinical practices. Cell detection methods have evolved from employing hand-crafted features to deep learning-based techniques to locate target cells. The essential idea of these methods is that their cell classifiers or detectors are trained in the pixel space, where the locations of target cells are labeled. In this paper, we seek a different route and propose a convolutional neural network (CNN)-based cell detection method that uses encoding of the output pixel space. For the cell detection problem, the output space is the sparsely labeled pixel locations indicating cell centers. Consequently, we employ random projections to encode the output space to a compressed vector of fixed dimension. Then, CNN regresses this compressed vector from the input pixels. Using L1-norm optimization, we recover sparse cell locations on the output pixel space from the predicted compressed vector. In the past, output space encoding using compressed sensing (CS) has been used in conjunction with linear and non-linear predictors. To the best of our knowledge, this is the first successful use of CNN with CS-based output space encoding. We experimentally demonstrate that proposed CNN + CS framework (referred to as CNNCS) exceeds the accuracy of the state-of-the-art methods on many benchmark datasets for microscopy cell detection. Additionally, we show that CNNCS can exploit ensemble average by using more than one random encodings of the output space. 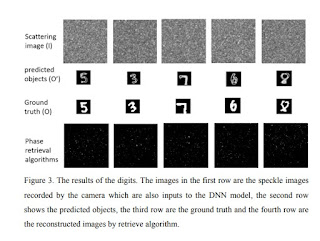 Imaging through scattering media is encountered in many disciplines or sciences, ranging from biology, mesescopic physics and astronomy. But it is still a big challenge because light suffers from multiple scattering is such media and can be totally decorrelated. Here, we propose a deep-learning-based method that can retrieve the image of a target behind a thick scattering medium. The method uses a trained deep neural network to fit the way of mapping of objects at one side of a thick scattering medium to the corresponding speckle patterns observed at the other side. For demonstration, we retrieve the images of a set of objects hidden behind a 3mm thick white polystyrene slab, the optical depth of which is 13.4 times of the scattering mean free path. Our work opens up a new way to tackle the longstanding challenge by using the technique of deep learning.