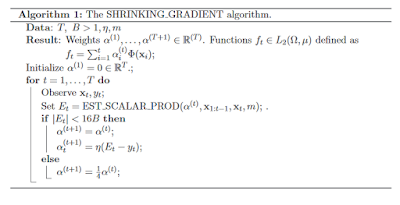 Infinite--Layer Networks (ILN) have recently been proposed as an architecture that mimics neural networks while enjoying some of the advantages of kernel methods. ILN are networks that integrate over infinitely many nodes within a single hidden layer. It has been demonstrated by several authors that the problem of learning ILN can be reduced to the kernel trick, implying that whenever a certain integral can be computed analytically they are efficiently learnable.
In this work we give an online algorithm for ILN, which avoids the kernel trick assumption. More generally and of independent interest, we show that kernel methods in general can be exploited even when the kernel cannot be efficiently computed but can only be estimated via sampling.
We provide a regret analysis for our algorithm, showing that it matches the sample complexity of methods which have access to kernel values. Thus, our method is the first to demonstrate that the kernel trick is not necessary as such, and random features suffice to obtain comparable performance.