Here are two interesting papers on Recurrent Neural Networks. Interestingly, here is an excerpt from the second preprint:

However, here we see that even without the sparse input assumption and L1 optimization in the output (a computationally expensive optimization used in compressive sensing) the network can achieve capacity greater than its degrees of freedom N. 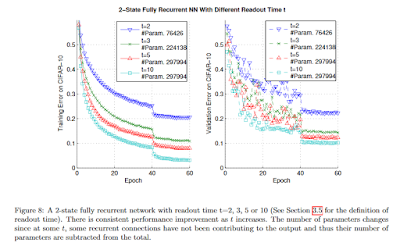 We discuss relations between Residual Networks (ResNet), Recurrent Neural Networks (RNNs) and the primate visual cortex. We begin with the observation that a shallow RNN is exactly equivalent to a very deep ResNet with weight sharing among the layers. A direct implementation of such a RNN, although having orders of magnitude fewer parameters, leads to a performance similar to the corresponding ResNet. We propose 1) a generalization of both RNN and ResNet architectures and 2) the conjecture that a class of moderately deep RNNs is a biologically-plausible model of the ventral stream in visual cortex. We demonstrate the effectiveness of the architectures by testing them on the CIFAR-10 dataset.


Recurrent neural networks (RNN) are simple dynamical systems whose computational power has been attributed to their short-term memory. Short-term memory of RNNs has been previously studied analytically only for the case of orthogonal networks, and only under annealed approximation, and uncorrelated input. Here for the first time, we present an exact solution to the memory capacity and the task-solving performance as a function of the structure of a given network instance, enabling direct determination of the function--structure relation in RNNs. We calculate the memory capacity for arbitrary networks with exponentially correlated input and further related it to the performance of the system on signal processing tasks in a supervised learning setup. We compute the expected error and the worst-case error bound as a function of the spectra of the network and the correlation structure of its inputs and outputs. Our results give an explanation for learning and generalization of task solving using short-term memory, which is crucial for building alternative computer architectures using physical phenomena based on the short-term memory principle.