Around the blogs in 78 hours 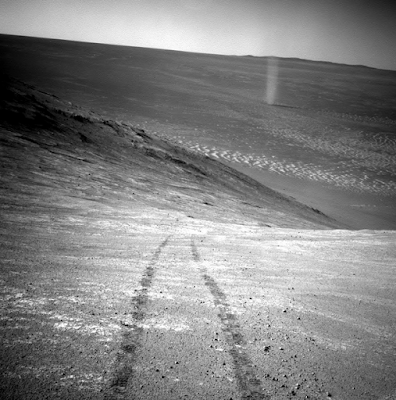 A rising, rotating column of hot air on Mars.

I briefly met David back at lunch in 2006 during a Bayesian conference in Paris. One thing for sure, he is impressively quick, witty and smart: The discussion went from how he built Dasher to figuring out how to go about detecting potential earth smashing meteorites by digitizing old astronomical photos in repositories around the world (this is still an awesome idea). The underlying algorithm is the one used by star trackers on satellites. However since each of the photographs are taken by different instruments there is an additional layer of parameters to guess before figuring out where the picture is pointing at. Obviously, the probabilities for such an event are rather small compared to other more highly probable catastrophic events. In effect, David produced the much needed:
David continues tweeting.

In other news, here are some other blog entries (in no particular order):


Off the convex path

On Quora a few people asnwered quite a few interesting questions:
Anima Anandkumar

From its perch high on a ridge, NASA's Mars Exploration Rover Opportunity recorded this image of a Martian dust devil twisting through the valley below. The view looks back at the rover's tracks leading up the north-facing slope of "Knudsen Ridge," which forms part of the southern edge of "Marathon Valley."
Opportunity took the image using its navigation camera (Navcam) on March 31, 2016, during the 4,332nd Martian day, or sol, of the rover's work on Mars.
Dust devils were a common sight for Opportunity's twin rover, Spirit, in its outpost at Gusev Crater. Dust devils have been an uncommon sight for Opportunity though.
Just as on Earth, a dust devil is created by a rising, rotating column of hot air. When the column whirls fast enough, it picks up tiny grains of dust from the ground, making the vortex visible.
During the uphill drive to reach the top of Knudsen Ridge, Opportunity's tilt reached 32 degrees, the steepest ever for any rover on Mars.
NASA's Jet Propulsion Laboratory, a division of the California Institute of Technology in Pasadena, manages the Mars Exploration Rover Project for NASA's Science Mission Directorate, Washington.
For more information about Opportunity, visit http://www.nasa.gov/rovers and http://mars.nasa.gov/mer/.