Leslie just mentioned to me that of he and his colleague's foray into deep learning. Here it is: 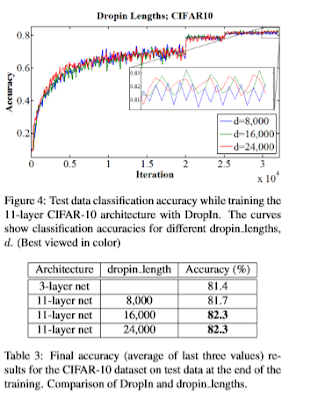 We introduce the concept of dynamically growing a neural network during training. In particular, an untrainable deep network starts as a trainable shallow network and newly added layers are slowly, organically added during training, thereby increasing the network's depth. This is accomplished by a new layer, which we call DropIn. The DropIn layer starts by passing the output from a previous layer (effectively skipping over the newly added layers), then increasingly including units from the new layers for both feedforward and backpropagation. We show that deep networks, which are untrainable with conventional methods, will converge with DropIn layers interspersed in the architecture. In addition, we demonstrate that DropIn provides regularization during training in an analogous way as dropout. Experiments are described with the MNIST dataset and various expanded LeNet architectures, CIFAR-10 dataset with its architecture expanded from 3 to 11 layers, and on the ImageNet dataset with the AlexNet architecture expanded to 13 layers and the VGG 16-layer architecture.

Liked this entry ? subscribe to Nuit Blanche's feed, there's more where that came from. You can also subscribe to Nuit Blanche by Email, explore the Big Picture in Compressive Sensing or the Matrix Factorization Jungle and join the conversations on compressive sensing, advanced matrix factorization and calibration issues on Linkedin.
By Igor at 11/25/2015 11:08:00 AM