You probably remember this Accidental Single Pixel Camera that was unwittingly imaging the Sun ?  Well, the same concept that can be used to test PV cells. 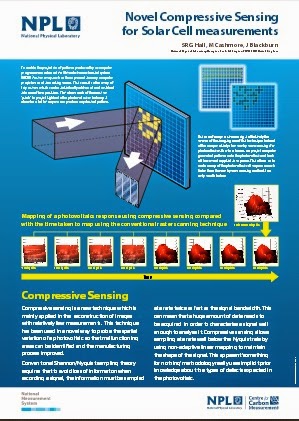 The actual poster is here.

From the press release:

Patterns of light are projected onto PV cells to
measure their response
Solar panels, or photovoltaic (PV) modules, are being rapidly deployed across the world as costs fall and the need for sustainable, low-carbon energy grows. Being able to effectively characterise PV cells is a key factor in quality control during manufacturing and understanding their long-term behaviour.
NPL researchers, Simon Hall, Matt Cashmore and John Blackburn, have developed a new technique for efficiently detecting malfunctioning areas of a PV module.
Conventional testing involves scanning the PV cells, row by row, with a laser beam and measuring the current generated in response to the light at a series of points. Spatial variations in the cells' performance can then be identified, but the process is time consuming.
In the new method, patterns of light are projected onto the PV cells using a digital micromirror device, such as those found in many office projectors. A technique called compressed sensing is then used to make a map of the current generated by the cells in response to the light, in order to identify malfunctioning areas.
Compressed sensing is a signal processing technique more commonly used to reconstruct images from relatively few pieces of information, through exploitation of the simplicity of real-world images (when compared to, say, an image made up of random pixels).
By assuming that defects are sparse, compressed sensing can identify abnormalities in the PV module using fewer measurements than the traditional raster scanning technique, and without the need for moving parts.
Several large companies have already shown interest in adopting the technology for a variety of scanning applications. The team at NPL have recently patented the method, and are now undertaking the necessary developments for it to be put into practice.
The work was the subject of the winning poster at last month's NPL Science Poster Fair
Find out more about NPL's work in Optical Radiation & Photonics
For more information, contact Simon Hall

Liked this entry ? subscribe to Nuit Blanche's feed, there's more where that came from. You can also subscribe to Nuit Blanche by Email, explore the Big Picture in Compressive Sensing or the Matrix Factorization Jungle and join the conversations on compressive sensing, advanced matrix factorization and calibration issues on Linkedin.
By Igor at 12/05/2014 10:30:00 AM