Congratulations to Yves Meyer who just received the Gauss prize at the ICM. The text of the ICM states: 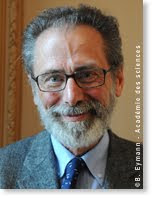 ....More recently, he has found a surprising connection between his early work on the model sets used to construct quasicrystals — the ‘Meyer Sets’ — and ‘compressed sensing’, a technique used for acquiring and reconstructing a signal utilizing the prior knowledge that it is sparse or compressible. Based on this he has developed a new algorithm for image processing. A version of such an algorithm has been installed in the space mission Herschel of the European Space Agency (ESA), which is aimed at providing images of the oldest and coldest stars in the universe.

For more on this connection between the Meyer Sets and Compressive Sensing, you can check these entries:

By coincidence, Sarah decided to read that paper recently. It is one of the few papers that is like a UFO in the current CS literature, i.e.it is using additional information (positivity of the function to be reconstructed) to make a generic statement on the sampling and the function reconstruction using l_1 techniques..

The connection to compressive sensing is deeper in my view. Yves Meyer was the person who Stephane Mallat went to to present his initial results on multiresolution and wavelets (he shows up in the acknowledgments of this seminal paper). Without a compact representation of functions we would not have grabbed the concept of sparsity which would have made it tremendously difficult to articulate the concept of compressed sensing if it had been found otherwise.
.
In a different direction, Terry Tao has a different take on Yves Meyer's contribution while Laurent Jacques just wrote a blog entry on Noiselets (Yves Meyer is a co-author of that paper) entitled Some comments on Noiselets. Noiselets are functions that are incoherent with Haar wavelets and can be found on Justin' Romberg's website.

Finally, Laurent Duval, the host of WITS, the dictionary on wavelets, went through an anagram on the matter.
Some of Yves Meyer's books (as a writer or as an editor) can be found in this Amazon Store.


Congratulations Yves.
P.S.: By the way, I am still waiting for those compressed sensing encoding results from Herschel but last time I checked there was not a clear connection between Yves Meyer's work and the attempt on Herschel. besides being connected to generic compressed sensing. In the Herschel case, one would use a traditional random projection whereas the work of Yves specifically argues for having access to the Fourier transform of the function to be reconstructed.
By Igor at 8/21/2010 06:38:00 AM