CS: Q&A with Esther Rodriguez-Villegas on a Compressive Sensing EEG 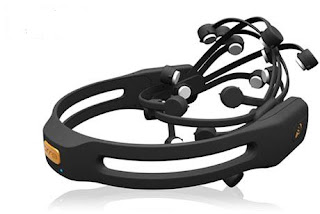 [I have updated this entry after some thoughts]

In Thursday's entry, I mentioned the paper by Amir Abdulghani, Alexander Casson and Esther Rodriguez-Villegas entitled Quantifying the Feasibility of Compressive Sensing in Portable Electroencephalography Systems where the authors look at an EEG compressive sensing system. Then, I stated the following:

....The result for 20 channels springs from applying a compressed sensing design such as the one shown above. The question I have is really how can we change this design entirely: For instance, instead of applying a simple \phi measurement to the signals after they have been amplified and digitized, what about providing some randomness in the reference voltage ? what about removing entirely both the Op-amps ?...

Thanks for your email. We've heard of your blog before. It is very interesting.

On a different note we found the EEG discussion on your blog interesting. I personally don't think that the randomness in the reference voltage would work though. The latter would somehow be equivalent to "downsampling the signal with dither", or in different words, the randomness in the reference voltage would create a similar effect to the input noise already introduced by the amplifiers themselves and then I presume one would be downsampling. However I don't think this would be possible because the minimum sampling rate was determined to be what it is for different applications considering the existing amplifiers noise, so I doubt it would be viable to further reduce this sampling rate after adding a signal which, from the circuit point of view, would play a similar role to this noise. The other alternative of switching on and off the reference would not be a practical option either because of slew-rate limitations of the amplifiers, which could only be overcome by pumping otherwise unnecessary biasing currents.

At the same time, eliminating the amplifiers is not an option because they are needed to "adjust" the already very weak signal levels to the ones required by the A/D converters, and in some cases also act as filters for, for example, the offset drift introduced by the electrodes, as well as high frequency noise. One could argue that having a better converter to cope with an increased range may do the job, but the problem with that would be that converters themselves require considerable amount of power, and as the number of bits of resolution they provide increases they become much more power hungry (apart from considerably more difficult to design). Also, if one thinks of a system that ideally should be operated on small batteries which provide a very limited voltage, this on its own represents a limitation for the converter range. So in the end, in the context of a low power portable system, for the front end, having an amplifier followed by a lower resolution converter is going to be the best option as long as the blocks are intelligently designed and customised, which from the circuit designer perspective is not a simple issue at all.

Now, your overall suggestion is interesting because even if those two options are not possible, there may be alternative ones that are. Fundamentally, I would say that thinking of a system in which part of the processing which is now thought of at a digital level, is "transferred back" to the front end and carried out in the analog domain may potentially significantly reduce both, the "requirements" of the converter and also the overall power consumption of the approach. This is because analog can offer a massively better tradeoff in terms of computational complexity versus power than digital, as long as speed of the operations is not a major issue and we are not trying to deal with resolutions of more than about 10 bits. So as a conclusion, I would say that I definitely agree with you in the fact that we should "think out of the box" and make an effort to redefine the system. I would go further than that to say that most probably that "redefinition" should follow an approach in which part of the compression algorithm is implemented earlier on in the "system chain" possibly following an analog based approach.

Anyway, to this end, we have a paper under review at the moment showing the performance of a straightforward CS application to EEG, tailored to establish a baseline performance of the approach to aid future EEG designers to make system level decisions. From that paper I would say that in general better performance is needed, although it is left to the application specific designer to decide. Certainly however there is a lot of potential here for EEG-tailored system level oriented compressive sensing research.

I did not realize that the op-amp was also acting as a filter, this is good to know. From this description, it seems obvious that at some point one should investigate an electrode based solution. While roaming through the openEEG list, I was made aware of the fact that there are two types of electrodes : active and passive. The passive ones require that they be wetted with eye drops in order to make a good contact with the scalp. In case, they are not wetted, there seems to be an extreme sensitivity of the electrode to the environmental EMI coming from your everyday appliances. In that case, one could conceive the use of shielded electrodes. The active electrodes remove the need for this eye drop liquid agent but there is the danger of having a "live" electrode. With this in mind, one could probably think of the' early in the chain' comment that Esther suggests, whereby a very low voltage active electrode could provide some type of random modulation.
Since we are thinking outside the box and we are dealing with amplifiers (or their potential removal) there is also the possibility of extreme quantization of the signal. Work along those lines include that of Petros Boufounos and Richard Baraniuk in 1-Bit Compressive Sensing and that of Laurent Jacques, David Hammond and Jalal Fadili, as featured here.

Finally, with regards to Esther's other comment on the reference voltage, it seems that the concept of Garbage in, Garbage out does not really apply in compressive sensing when done right. I am making a particular reference to an early paper by Joel Tropp, Michael Wakin, Marco Duarte, Dror Baron, and Richard Baraniuk entitled Random Filters For Compressive Sampling And Reconstruction where one can read the following sentence:

At first glance, one might think this method would convert a signal into garbage.

As I said before, you don't often see that type of assessment in publications. I tried these random filters, and it worked for the limited case I computed.

Finally, to give some perspective with regards to low cost EEGs used in BCI-like systems, a current low cost commercially available Emotiv EEG system, with 14 electrodes, is limited by its battery capability of about 12 hours. It also uses passive electrodes and therefore liquid drops as the liquid needed to make good contact with the scalp. One can expect this liquid to evaporate over a 12 hour time period.
Thanks Esther for sharing your views!