[Update: Dear Hackaday readers, this ECG system is an instance of compressive sensing, where the encoding is very low power while the power hungry decoding of the signal is performed off line. A normal system requires the encoding of the signal (a power hungry process) to be performed during acquisition before sending the signal out.  The iPhone is a central piece and serves as a full scale computer . It performs state of the art optimization computations (l_1 minimization with wavelet frames) to decode the signal. ]


Following up on yesterday's entry on the CS-ECG trade studies performed by Pierre Vandergheynst at EPFL, and because of my commentary, I decided to ask him the following questions:

You may have noticed my remark on the blog about the CS-ECG. Yet, I think I am misunderstanding some part of the slide. Namely the right figure on this slide: 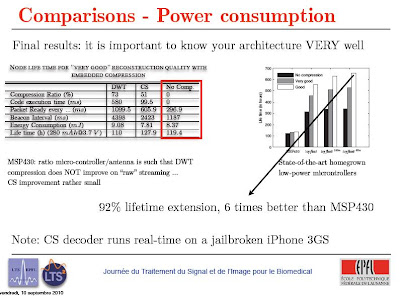 From your trade studies, you make the statement that CS is marginally better than no compression but I don't understand the point being made with the figure on the right. Can you enlighten me ?


The improvement was only marginal for the msp430 system which revealed that its micro controller is too greedy in terms of power with respect to the antenna. However we show in the fig on the right that using truly low power microcontrollers can lead to dramatic reduction in power consumption: as the cs encoder becomes 7 to 8 times more efficient than an optimized wavelet coder...it was the first step in a more ambitious project. Second step is to build an analog to digital system that will use analog CS to sample the ECG, hence removing the power hungry a2d step


Do you think this idea of classifier as an app has some legs  (Note: I personally do from experience)? Also can you also enlighten me as to why you are jailbreaking the iPhone, i.e. what part of the system is not currently available from the Apple API ?


In fact the idea of performing classification on the measurements directly (if this is what you mean) is certainly very interesting and that is one of the directions in our bio cs node project. The idea would be to have a very reactive system that would just classify the heart signals and then if a specific situation is detected by the classifier the whole signal can be reconstructed, archived or sent to a physician.

As for the iPhone, the main problem was the bluetooth layer. Apple does not let you easily use it for general purpose communication. We thus had to break it to implement our own protocol.

All in all, I hope people realize that this is a complete system implementation from A to Z, and that using CS can become a crucial technology in a real life environment. It shows that there are many intricate but interesting issues when deploying CS in such a complete application.


At the very least if a classifier is too difficult to implement on the multiple unhealthy cases revealed by an EKG, then a classifier could at the very least identify only those parts of the EKG traces when the heart is healthy. On a different note, I'll add this system on the compressive sensing hardware page.


If you think this blog provides a service, please support it by ordering through the Amazon - Nuit Blanche Reference Store