I am away for a week, and then baam, not only do we get hit by Wired readers (i'll talk about this later) but we have a series of really interesting papers trying to make a clearer connection to some issues found in hardware making. First here is a connection to the calibration issue for the random lens imager or the more recent linear black box discovery problem featured in MMA17. We now have a bound on the number of measurements:
s · log^5(np),
In order to understand these parameters you need to read the full paper Sparse Channel Separation using Random Probes by Justin Romberg, Ramesh Neelamani. The abstract reads:

This paper considers the problem of estimating the channel response (or Green's function) between multiple source-receiver pairs. Typically, the channel responses are estimated one-at-a-time: a single source sends out a known probe signal, the receiver measures the probe signal convolved with the channel response, and the responses are recovered using deconvolution. In this paper, we show that if the channel responses are sparse and the probe signals are random, then we can significantly reduce the total amount of time required to probe the channels by activating all of the sources simultaneously. With all sources activated simultaneously, the receiver measures a superposition of all the channel responses convolved with the respective probe signals. Separating this cumulative response into individual channel responses can be posed as a linear inverse problem.
We show that channel response separation is possible (and stable) even when the probing signals are relatively short in spite of the corresponding linear system of equations becoming severely underdetermined. We derive a theoretical lower bound on the length of the source signals that guarantees that this separation is possible with high probability. The bound is derived by putting the problem in the context of finding a sparse solution to an underdetermined system of equations, and then using mathematical tools from the theory of compressive sensing. Finally, we discuss some practical applications of these results, which include forward modeling for seismic imaging, channel equalization in multiple-input multiple-output communication, and increasing the field-of-view in an imaging system by using coded apertures.

Thanks Justin and Neelsh. This is very timely, we just now need to make sure we are crossing the Donoho-Tanner border in the right direction.

There is also this paper that parallels some of the Imaging With Nature concepts described earlier, as once again, not only do we want to sense things through some random medium but we are also striving to find the structure of that random medium at the same time. This is just fascinating: Imaging through turbulence using compressive coherence sensing by Ashwin Wagadarikar, Daniel L. Marks, Kerkil Choi, Ryoichi Horisaki, and David Brady.The abstract reads:

Previous studies have shown that the isoplanatic distortion due to turbulence and the image of a remote object may be jointly estimated from the 4D mutual intensity across an aperture. This paper shows that decompressive inference on a 2D slice of the 4D mutual intensity, as measured by a rotational shear interferometer, is sufficient for estimation of sparse objects imaged through turbulence. The 2D slice is processed using an iterative algorithm that alternates between estimating the sparse objects and estimating the turbulence-induced phase screen. This approach may enable new systems that infer object properties through turbulence without exhaustive sampling of coherence functions.

This paper considers the reconstruction of structured-sparse signals from noisy linear observations. In particular, the support of the signal coefficients is parameterized by hidden binary pattern, and a structured probabilistic prior (e.g., Markov random chain/field/tree) is assumed on the pattern. Exact inference is discussed and an approximate inference scheme, based on loopy belief propagation (BP), is proposed. The proposed scheme iterates between exploitation of the observation-structure and exploitation of the pattern-structure, and is closely related to noncoherent turbo equalization, as used in digital communication receivers. An algorithm that exploits the observation structure is then detailed based on approximate message passing ideas. The application of EXIT charts is discussed, and empirical phase transition plots are calculated for Markov-chain structured sparsity. 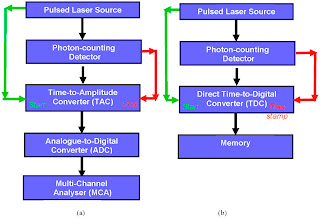 Finally, I found the following article on the interwebs entitled: Single-pixel imaging using 3D scanning time-of-flight photon counting by Robert Lamb and Gerald Buller. I need to add this tech to the compressive sensing hardware page.
By Igor at 2/27/2010 03:40:00 PM

The link for the 'imaging through turbulence' article seems to point at a biomed imaging article.