The scent of a glass of wine.

As some of you have noted, I am performing a little self-experiment of putting a NOse 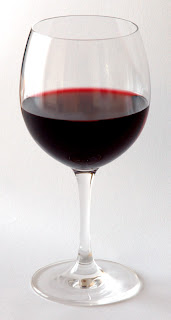 Clip While Eating (No-C-WE) to see how much weight I can lose [1]. I am currently in the mode of not doing this to see how the weight loss fares.
Here is a small side-effect of interest. Before this self-experimentation, when I would go out, I would be a little tipsy when I would drink less than a quarter a glass of Champagne or red wine. Yes, I know! One fourth of a glass is small, but invariably, my brain would make me feel I was in a different operating mode. My speech would be a little slow but not to the point that people around me would notice. I would notice it though. In effect, very early in the drinking mode, I would know and accept that I was not in shape to drive or do anything that required some form of focused control. Do remember though that the amounts we are talking about would be well below most drinking standards (except those with full prohibition).
During this period of self-experimentation, I have mentioned the fact that most food's scent went away and the fact that I ate less as a result. Wine drinking took a stranger turn. I tried this several times and noticed the same effect. With the nose clip on, I can drink about four full glasses of wine and feel perfectly ok. By ok, I mean that I can talk and have a good thoughtful conversation with no obvious side effect. However, as soon as I would walk away from the dinner table, I would not walk straight nor my movements would be as controlled as I thought they should be. My brain literally would not understand why it was unable to do things right.
Is this the same effect that happens to social drunks or alcoholics ? i.e. does getting accustomed to the taste of a certain spirit puts the brain in a mode equivalent to that of a person who drinks with a nose clip on ? Is the mechanism that makes us tipsy, scent related ? If so, how can we put it back in people who have lost it ?
[1] The idea came from Seth Roberts series of self experimentations.
By Igor at 8/27/2009 02:59:00 PM

Email ThisBlogThis!Share to TwitterShare to FacebookShare to Pinterest
labels: NO-C-WE

Igor Murphy there with the drink on him.
Caffeine is my drug of choice and that indeed is why I was kicked out of the Old Country.

Face down in a gutter on Friday night whispering to Jesus about compressive sensing. Such is the life of a researcher these days.