2001: A Space Odyssey featured a Moon landing on a Moon base. In the real world, the first landing occurred 40 years ago. But we never set up a Moon base.

The movie also featured a journey from a Space Station. In the real world, our current Space Station is international but we do not use it as a way to go to the Moon. 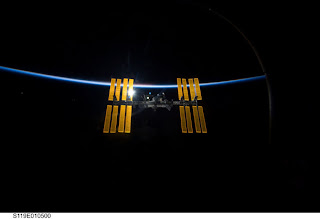 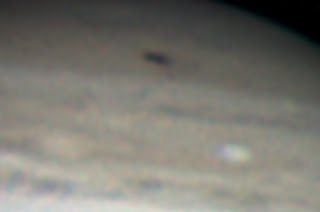 It is a concern because on July 16th, 1994, fifteen years ago to the day, the Shoemaker-Levy 9 comet started hitting Jupiter in what remains the most studied series of comet devastating impacts on a celestial body. What are the probabilities for two comets hitting Jupiter at about the same calendar day fifteen years apart ? My take is that we need to see if we have a similar issue as what happens every year in August with the Perseid showers. If this is the case, our Near Earth Object Program has not detected it.

For what it's worth, I remember where I was on the 25th anniversary of the Moon Landing (July 20th 1994) as the pilot of the KC-135 (vomit comet) commemorated that day by taking us into one more parabola in Lunar gravity after a long two hour flight made up of several weightless periods. This lunar bump was the first a long series lunar flights where we looked at aspects of plumbing that are still unclear to this day. Our unsophisticated approach to basic human needs in space pretty much define to me the wide divide between our dreams and the reality of a Human led Space Odyssey.

[Update, July 21, 2009: I am not the first one to make the connection between this hit and Shoemaker-Levy 9 fifteen years ago, some folks at JPL made that connection, now we just need the people in the right office at JPL to notice]