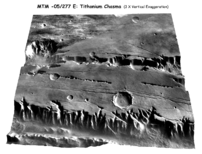 Image via Wikipedia
I just recently found a blog that seems to focus on Compressed Sensing. In all, I have to say that Google is not doing a great job at taking into account labels from its own platform. In particular, I have found some odd discrepancies between the pagerank of some pages and the number of people that use Google reader to view them. Anyway, the blog of Andrés Corrada-Emmanuel entitled De Rerum Natura brings up some interesting applications in the determination of elevation models (DEM) from photographs as he has to deal with underdetermined systems of equations.. The postings are at:

http://www.corrada.com/blog/category/compressed-sensing/
he just had his paper accepted at ICML 08. The title is Autonomous geometric precision error estimation in low-level computer vision tasks by Andrés Corrada-Emmanuel and Howard Schultz. The abstract reads:

Errors in map-making tasks using computer vision are sparse. We demonstrate this by considering the construction of digital elevation models that employ stereo matching algorithms to triangulate real-world points. This sparsity, coupled with a geometric theory of errors recently developed by the authors, allows for autonomous agents to calculate their own precision independently of ground truth. We connect these developments with recent advances in the mathematics of sparse signal reconstruction or compressed sensing. The theory presented here extends the autonomy of 3-D model reconstructions discovered in the 1990s to their errors.

This is new. I don't think I have ever seen anybody talking about precision errors being a sparse signals before.


With the Netflix competition, we saw a lot of very interesting developments. One of them, as Andrew Gelman points out, is the fact that with a flurry of algorithms to choose from, data is paramount in leading to new and improved findings. An example of something similar in Neuroscience is the neuron challenge mentioned before. However, as echoed in this entry by Hal Daume III ( Those Darn Biologists...) there is very little incentive for biologists to publish their results with an analysis using new algorithms: This is not getting their papers published. A new initiative may help in that respect: the CRCNS - Collaborative Research in Computational Neuroscience - Data sharing activity is making biological / neuroscience datasets available for download here. This is prodigious idea. It currently lists datasets in:

While The following additional data sets will be available by about June 2008: