Ever since the Nature Article of Daniel Lee and Sebastian Seung (Learning the parts of objects by non-negative matrix factorization), there has a been steady progress in implementing ever increasingly sophisticated algorithms performing the Non-Negative Matrix Factorization. Patrik Hoyer came up with the Non-negative Matrix Factorization with sparseness constraints and we now have Shift Invariant Sparse Coding of Image and Music Data by Morten Mørup and Mikkel Schmidt.
Closer to some of the interest expressed in this blog is Space Situational Awareness. Bob Plemmons has used this method to perform the spectral unmixing from data sensed for the Maui Hyperspectral sensors. Much of his work is mentioned in [1] . 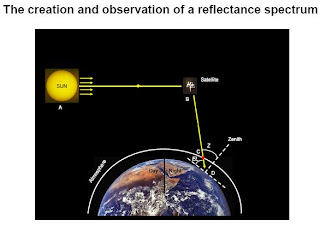 By looking up from the ground, and knowing the particular reflectance as a function of wavelength of particular elements such as aluminum, black paints,... one should be able to identify specific elements orbiting the Earth. It is important because the population of earth orbiting elements is constantly changing and needs to be appraised often. Space debris can have a significant impact on other orbiting spacecrafts and satellites.
Since Bob mentions the Maui shots of the Columbia spacecraft, I wonder if those shots were taken with the same hyperspectral sensor ?

Because in case it is, we can see that most of the Shuttle is white..... 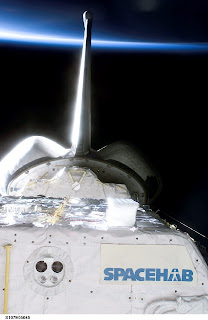 whereas our camera that was on top of the Spacehab module was very shiny (it was behind the white box on the roof). 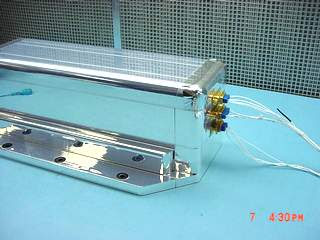 It would be of interest to see if the method can do a good job at spatial resolution. I can provide more information if needed. From there we could infer if there were missing pieces from the RCC panels as shown from the Southwest Research Institute foam impact experiment. 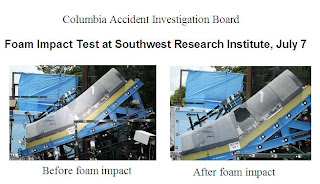 We formulate the problem of hyperspectral image unmixing as a nonconvex optimization problem, similar to nonnegative matrix factorization. We present a heuristic for approximately solving this problem using an alternating projected subgradient approach. Finally, we present the result of applying this method on the 1990 AVIRIS image of Cuprite, Nevada and show that our results are in agreement with similar studies on the same data.

On a related note, ESA makes available imagery from ENVISAT/MERIS to whoever applies for it for research purposes.
Reference:
[1] Low-Rank Nonnegative Factorizations for Spectral Imaging Applications, Bob Plemmons
By Igor at 11/30/2007 03:20:00 AM