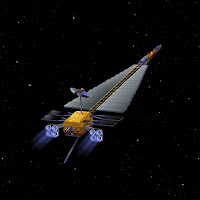 In his last talk at the Summer school on Compressive Sampling and Frontiers in Signal Processing, Emmanuel Candès talked about "Applications, experiments and open problems". It was very inspiring and intriguing. While people like Rick Chartrand are looking at Lp with p less than 1, Emmanuel proposes to use a reweighted L1 in order to converge very rapidly to the L0 solution. He then goes on to show this stunning result with overcomplete bases. wow. Maybe that will help deblurring the current images from the Rice camera.

With regards to universal compression, Emmanuel makes the good point that when doing exploration, NASA spends a good amount of energy in the compression of images on board spacecrafts. The idea is that the bandwidth is extremely reduced and you want to send as much as possible interesting data. Historically, one of the underlying reasons the Russians developed Rorsats was because their Digital processing (or number crunching) capabilities which were not as good as that in the U.S. So in order to provide adequate computational capabilities on board of these satellites systems and because the systems required low orbit, they had to have nuclear reactors. About 20 to 30 of them were actually launched (only one nuclear reactor was sent into space in the U.S.) All of them now contributing to space debris issues. Some of them fell back to earth. Power is also the reason why Prometheus, a nuclear reactor concept was envisioned in order to explore Jupiter and its moons. It was well studied until it got canceled. With the advent of compressed sensing, maybe we should think about doing these missions with hardware that do not require that much power again. I previously highlighted a much more lucrative application where bandwidth was also a real issue.
By Igor at 9/01/2007 04:36:00 PM