I have had this question asked to me recently and I think the cleanest explanation from the standpoint of statistics and maximum entropy consideration lies in this entry on Bayesian inference of the median.

Looking back at some examples, when Andrew Ng [1] tries to build depth maps from monocular vision this is what he says when trying to fit test data from natural scene to statistical models:

We now present a second model that uses Laplacians instead of Gaussians to model the posterior distribution of the depths. Our motivation for doing so is three-fold. First, a histogram of the relative depths (di - dj ) empirically appears Laplacian, which strongly suggests that it is better modeled as one. Second, the Laplacian distribution has heavier tails, and is therefore more robust to outliers in the image features and error in the trainingset depthmaps (collected with a laser scanner; see Section 5.1). Third, the Gaussian model was generally unable to give depthmaps with sharp edges; in contrast, Laplacians tend to model sharp transitions/outliers better.

Obtaining a sparse (i.e. the smallest model) and a robust solution (to outliers) is the reason why he uses L1. Using L1 is also why Lawrence Carin, Shihao Ji and Ya Xue [2] use Laplace distributions in order to obtain a sparse solution in their Bayesian compressive sensing approach. The chapter in Inder Jeet Taneja's book is a nice reference to differential entropy and associated probability distributions that maximize it (in other words, given a certain type of information/assumptions on the problem what is the type of distribution that allows one to build a model with that knowledge and not more). In imaging, decomposing a scene with a dictionary of overcomplete bases using the compressed sensing approach has shown L0 to be well approximated by L1. So in effect, when one solves approximation problems with L1, many times, one is solving for L0, i.e. for the sparser solution out of the whole potentially overcomplete dictionary.

I say many times, because it also happens that combinatorial search schemes (L0) are unavoidable as shown in this paper by David Donoho and Victoria Stodden (Breakdown Point of Model When the Number of Variables Exceeds the Observations ) 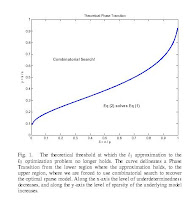 The "phase diagram" shown on the side marks the boundary between areas where L1 is like L0 and when L1 cannot converge to an L0 solution. [p is the number of variables. n is the number of observations and k is measure of sparsity of the underlying model] The x-axis is the level of underdeterminedness (close to 0 means very few observations compared to the number of variables) , and the y-axis is the level of sparsity of the underlying model (close to 0 means a very dense signal, close to 1 means a very sparse signal)

Nice blog. What about L-alpha whith alpha in [0,1] ? Could they provide a continum of distances/priors with varying sparseness? Is it a solution to approximate L0 with L(0+epsilon), avoiding the combinatronic complexity? What is the corresponding distribution for L-alpha? Hum hum, I should google that!

I wish I had a good answer to that. As far as I understand, the reason L1 is interesting in replacing L0 is because there are linear programming codes readily available. Donoho pointed this out in 1995 in his Basis Pursuit papers: Interior point techniques that have just shown up on the radar screen have enabled the ability to take a stab at larger problems than say two years earlier. So these somewhat recent advances in doing faster linear programming and the connection between L1 and L0 have made that tool nearly impossible to not use.

Pierre, do you perhaps mean alpha in [1,2]? That way the problem is still tractable. With alpha \in [1,2] there's still a certain threshold that the gradient in direction of the feature must exceed in order for that feature to be included, so you should get a continuum of sparse->dense solutions.

Letting alpha be smaller than 1 makes gradient infinitely large whenever there are 0's in the solution vector. So it's not clear to me that L-.9999 solution would be less sparse, or easier to find than L-0 solution

Yaroslav : I was really meaning alpha in [0,1], but in [1,2[ is also ok for obtaining a sparser solution than with alpha=2. Actually, to my understanding, the solution will be less and less sparse as alpha goes from 0 to 2. I agree that the gradiant will become infinite in 0 if alpha<=1, but as I've not implemented anything, I don't see why this is a pb. The choice of alpha=1 in L-1 regularization schemes seems just justified by easy computations.