Finite Rate of Innovation is the reason why S_n works in Neutron Transport ?

One of the most annoying issue with respect to neutron transport using the Linear Bolztmann equation, is the very large family of solution techniques. One of the underlying reason is the dimensionality of the problem. At the very least the problem is dimension 2 but it can go all the way to dimension 7. Another reason is the flurry of solution techniques being used. One of them is Caseology wherein one devises the solution of a problem by projecting it on a set of eigenfunctions known as Case eigenfunctions. Other solution techniques that are more ad-hoc include projection onto a set of Spherical Harmonic functions (P_N solution technique) or a set of Dirac functions (S_N solution or Discrete Ordinates). Yet in neither cases is there a good way to stop these computations except through the use of ad-hoc criterias. Then compressed sensing happened with its flurry of unusual results. This next one looks like one of those.

Pier Luigi Dragotti, Martin Vetterli Thierry Blu just wrote on Sampling Moments and Reconstructing Signals of Finite Rate of Innovation: Shannon Meets Strang-Fix [1] were they show that if you were to project a certain number of diracs onto a family of scaling and wavelet functions, all the information you need to reconstruct the full signal (all the diracs) is already "stored" in the scaling functions coefficients. This is obviously of clear interest to people who want to do superresolution and is also probably the reason why P_n or S_n actually work.

It may even provide a good starting point to solving the transport equation using the multi-dimensional polynomials found by Jacques Devooght [2]. 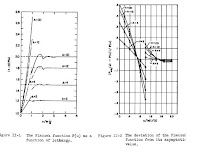 On a side note, there is also this nagging ressemblance between the kernels used by Dragotti, Vetterli and Blu and the Placzek function central to neutron thermalization in neutron transport. The uptake from this is that most sources are dirac-like and the Placzek function is really the Green's function providing an idea on how that source will downscatter in some infinite medium. In other words, the "simplified" linear transport equation (in energy) is one of these Finite-rate innovation kernels found by Dragotti, Vetterli and Blu.

[2] Jacques Devooght, New elementary solutions of the monoenergetic Boltzmann equation result Transport Theory and Statistical Physics; Volume 20 No. 5 Page 383
By Igor at 4/25/2007 07:31:00 AM