CS: These Technologies Do Not Exist: A Random Anger Coding Scheme for PET/SPECT cameras

While I try to bring the most updated information on compressive sensing by finding the latest and greatest, I am also toying with figuring out how new compressive sensing schemes could be implemented. Because some of these technologies are bold, it is unlikely you will find any reference to them anywhere but here. I also mentioned another reason for doing this before so without further wait, here we go.


Back in the middle of the 90's while I was involved with some Excess Weapons Plutonium disposition studies and discovered what the National Academies of Science really did in the U.S. During that time, I came across the National Academy Press website that featured a general study by the National Academy of Sciences on the Mathematics and Physics of Emerging Biomedical Imaging. I never got into that field but I bought and kept the book on the side just in case. The proceedings were a very thorough list of the current state of the art of all the imaging technologies at that point in time. The document also included a "to do" list highlighting how one could improve each of these technologies.

Anyway, today I'll focus on the Positron Emission Tomography technology, it starts here in the proceedings. Briefly speaking, a decaying isotope is inserted in the body. The element decays by emitting a positron (an anti-electron) which quickly interacts with the surrounding matter (since it is anti-matter) to produce two photons. These photons have the nice characteristics of being emitted 180 degrees away from each other. The PET camera is devised to detect these photons traveling opposite from each other. Some amount of synchronization is used to do that but the main issue is making sure that there is a good spatial resolution so that the photons are detected in pairs. The only way of detecting 511 KeV photons is through a two stage process. First, the photons need to be converted to visible light, then either a Photo Multiplier Tubes (PMT) or an Avalanche PhotoDiode (APD) convert that light into a current to be eventually used in the electronic chain. 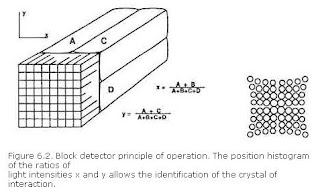 One of the issue faced by this technology is the mismatch between the small size of the photon-to-light converter and the larger size of the PMT detector. The converter is also a diffusive material for light. The small size of the converter is due to the need to provide the spatial resolution to the overall detector. Therefore, one needs to find a way to translate the fine grained spatial information of the photon-to-light converter and the coarse grained PMT device. The figure above shows the issue at hand. This translation is performed with the Anger Coding Scheme or Anger logic named after Hal Anger who developed this technique in the original PET camera in 1958. 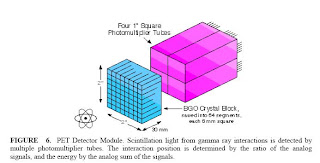 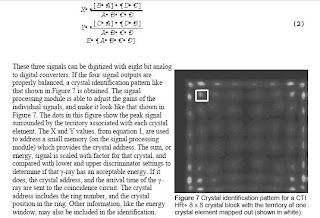 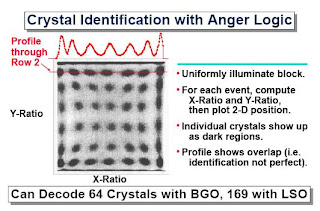 The top figure shows the response of the BGO-LSO (converter) block being fully illuminated. If a single conversion were to be identified, one would get just a portion of the figure above. The figure below shows a more complete scheme where the response of the converter is then adequately summed with weights after light has interacted with the PMTs. 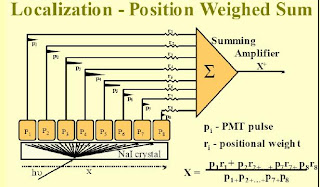 Both processes compose the Anger logic. The Technology That Does Not Exist that is the subject of this entry could adequately be called a Random Anger Logic or Random Anger Coding Scheme whereby one could have a combination of Randomly altered converter materials (different widths, materials, reflective occlusions,...) and random "positional" weights.

Sometimes, it takes more time to explain what exists than what is proposed :-)

You can also check this presentation to understand the Anger logic: